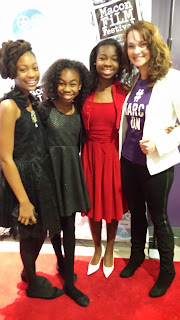 This morning while listening to a news quiz show on MSNBC, I heard the host refer to Selma as a "controversial film." As in: President Obama screened what controversial film for cast and crew this weekend? DING DING DING Selma! The guesser earned 100 points, and the host earned my complete frustration. UGH. Really? Out of billions of adjectives, that's the one some writer picked? Sigh. How about historic, dramatic, timely, award-nominated... Oh right.

So fine - let's talk about controversies and snubs. Because with the way Selma seems to be affecting audiences nationwide, I suppose its fair to admit there is a big white elephant in the room.

First: the LBJ "controversy." Friends, that's a non-starter. Read the Washington Post article, and then go watch the film. Selma shows President Johnson for who he was: A Master Politician. And Dr. King is shown to be a Master Activist. They both did the job in the way they knew how, with the resources they had. The End. That's no controversy.

Second: As awards season shifts into high gear, I know I personally have been disappointed by gaps in the nominations. I'm not the only one. But I refuse to call it a "snub." A snub by definition is done with intent. So let's call it instead a "miss." And here are my thoughts on the "Misses:"
1. Selma has received Academy nominations for Best Picture and Best Song - these nominations are great honors, amid strong competition this year. Ground-breaking films like Boyhood and Birdman are sharing this category with us. We are in stellar company.
2. Many great films and individuals in the past have been overlooked by the Oscars. Here too we are in stellar company.
3. Ava DuVernay and David Oyelowo, Carmen Ejogo, Bradford Young - they are all going to be just fine. They have faced much bigger hurdles than an empty trophy shelf to get where they are.
4. Selma speaks for itself. If you are unhappy with the nominations, cast your vote at the box office. Because at the end of the day, an Oscar is a huge honor - perhaps the highest in our industry - but money makes movies. Not accolades.
5. This is the most important thing I want you to know about Selma. When Ava created this film, I don't think she envisioned an audience whose demographic reflected the Academy. Selma wasn't made for a generation that REMEMBERS SELMA. It was made for all of those who weren't born yet. Like me, yes, but much more importantly, for the young men and women like our four girls who played the roles of the victims of the 16th St Baptist Church bombing. When I hear them speak about how this movie has changed them... When I see how my friend Heather has taken her middle school students in Dallas to see the film and talk about it... When my cousin in Kansas shares with me something her daughter found out about Viola Liuzzo that I didn't already know (and believe me that's not an easy trick)... Well, those are the awards for which Selma and Ava and David - and all of those who worked on the film - have been nominated and have won.

For more information on how students can see Selma for free, click here.
Posted by Tara Ochs at 1:17 PM

So glad to have you on OUR side. xoxo #marchon
Tracy Eleazer (Trinity Simone's mom)

Great Post thank you I wish I was less emotional around ignorance i have to share this with some old folks hoping they will just 'shut up' re: 'we been robbed'.