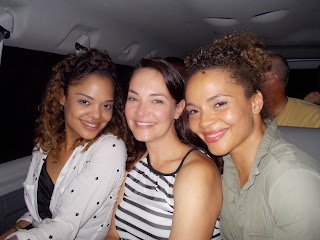 I love this picture. It's of myself, Tessa Thompson and Carmen Ejogo on our way to a BBQ one night in Selma. All of our faces are glowing from a day of filming the marches on the Edmund Pettus Bridge, and we've scrubbed all that movie makeup off, taken down (or off) our 60s hair, and we all probably could be mistaken for college kids. For a month on the set, we were surrounded by incredible, powerful women. And that wasn't an accident.

Last night I was performing at Dad's Garage - an improv comedy show - which for one special weekend included Scott Adsit of 30 Rock and Big Hero 6 fame. He is formerly from Second City, a real veteran of the boards, and a team player. Before we went on stage that evening, he asked if Jessica and I could also play in the second half. He had noticed that our company was imbalanced in terms of gender and he was simply taking steps to correct that. It was then I had one of Oprah's Aha moments!

Ava DuVernay made it a priority to include women's stories in Selma. Scott Adsit made a point of including women in our show last night. It's really that simple, and sadly that hard. Gender inequality can be shifted in quite the same way racial inequality can. Beginning with intentional inclusion -   making balance a priority.

It's not easy to be that first woman. Or that only woman. The actual fact of Viola Liuzzo's departure to Selma is that she did not ask for permission from her husband and family to leave, she just left. She had to call from the road to say that she was leaving, because otherwise she probably would not have been allowed to go. In 1965, women had very little rights. The horror of the aftermath of Viola's death upon her family was multiplied by the fact that many felt Viola had acted outside of acceptable behaviors for a woman, a wife and a mother. A Ladies' Home Journal magazine survey taken right after Liuzzo's death asked its readers what kind of woman would leave her family for a civil rights demonstration. The magazine suggested that she had brought death on herself by leaving home -- and 55% of its readers agreed.

I was raised in the South, and taught to behave like a lady. Much of that upbringing I value - to treat everyone with respect, to behave with dignity and to ensure that others are cared for first. But I also recognize the trappings of a system which was well-entrenched in 1965 and still clings to its position of power today. Gender inequality, racial inequality, human rights inequality - these are issues we cannot sleep on. I chose to enter the world of improv comedy in 1995 in Tallahassee because it looked like fun, and I was needed because there were no women playing in the local troupe. I was asked to join by a man who noticed the imbalance. He was the same man who had been, (the years before,) the only gay man in the troupe. It is tough to be a first and an only. But it starts with a choice.

Ms. Ochs, I'm thrilled to find your blog. Viola Liuzzo is a personal hero of mine, and I was over the moon to see her included in the film. Thanks for sharing some of your process and your experience on the set. Thank you also for your thoughtful and compelling portrayal of Ms. Liuzzo!