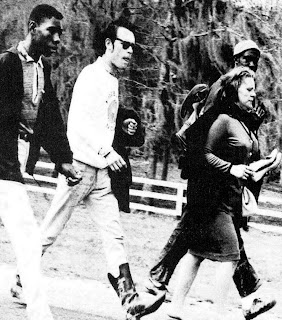 I was sitting in the hair trailer, quietly contemplating the past week of shooting on location in Selma, Alabama - an experience that will warrant an entirely separate blog post - when Colman Domingo tapped me on the shoulder. Colman plays Ralph David Abernathy in the film, and has been the heart of our cast. A person I will forever be grateful for having met. He was sitting in the chair next to me getting his hair sifted on (Hollywood magic!) and he spoke some powerful words to me that I will keep for myself except to say this: He said, "Viola is with you." I wept. I would like to share with you the story of how I discovered Viola. While preparing for the audition for Viola, I did my obligatory actor type research. I found pictures, I wiki'd, I googled. The role in the script was almost non-existent, just a few simple lines from a woman to her husband, telling him she was heading to Selma to participate in the marches. The director, Ava DuVernay, essentially rewrote the script, and in the process fought to make women a more vital part of the story - hence Viola's inclusion. The script didn't say much more about Viola, just how she was there, and then murdered, so I had to make quite a few of my own choices. I started digging. The deeper I got into Viola's story, the more overwhelmed I became. We only get a glimpse of her courageous existence in the film, but beneath that is an ocean of pain and bravery that I was stunned to find. I want to tell you the whole story, but it would take one hundred blog posts, a film, a field trip, and a tattoo. Because Viola's life isn't just her own. It is her children's, it is a movement's, a race's, a gender's, a conspiracy laden miasma of buried truths, disseminated misinformation and resentful failures on the part of people who should have known better. I will tell you more of her story, but I'll start here with this experience. The image I have of Viola in my mind is the photograph of her marching along the highway. She is focused, determined, weary. She carries her shoes in her hands. The shoes were the first thing that struck me. I hate wearing shoes. While shooting the scene with David Silverman of Viola and husband Jim at home watching the Bloody Sunday footage, and subsequently planning for her departure, I insisted on being barefoot. All I wanted for the entire month of shooting was to pay as much respect to her spirit as possible. It was my job alone to make sure that Mrs. Liuzzo's voice was heard in the few words and multiple moments I had on camera. I was absolutely overwhelmed with the monumental responsibility. 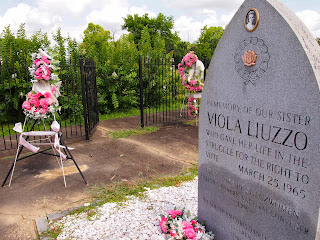 On a day off from shooting I went to visit Viola's marker on Hwy 80. True to the words I'd read, it is incredibly difficult to spot. I drove past it four times before I finally arrived at a lonely, fenced in granite marker at the top of a hill off the highway in Lowndes County, Alabama. It was 3 in the afternoon, 100 degrees and cloudless. I parked the car and stepped into the enclosure. Old plastic flower wreaths were shattered and scattered about, from weather and time, and grass overtaking the stone covered mound was a testament to how few know who Viola was. I stayed at this place for an hour. I spent most of the time pulling weeds and rearranging the old flowers, talking out loud to no one at all. Well, to Viola, I guess. I told her I was sorry. It should have been Meryl Streep. It should have been Cate Blanchett. I wasn't sure why they hadn't called yet to tell me I was fired, that Kate Winslet would be taking over. Because Viola deserved that - the greatest actress in the world. She has deserved so much that she hasn't received, as does her family. I asked her how she had the courage to do what she did - leave a family that she loved, travel hundreds of miles alone, in spite of what society told her women, wives and mothers 'should' be doing and fight so fearlessly for what she believed in. It seemed super-heroic. That day, at Viola's marker, I received a simple answer. What Viola Liuzzo and thousands of others did in 1965 wasn't an example of superhuman courage, unique and godlike motivation or power. They were all just people. Just people. Like me. And you. If we were all in those same shoes, (or out of them in Viola's case) we would and COULD do the same. I could represent Viola because she wasn't different, she was a mom and a wife and a nurse and a student and a white woman who wanted change. So maybe Colman was right. Maybe Viola was with me. I desperately hope that she got to be there on our last day of shooting and stand again in triumph at the steps of the capital in Montgomery, and listen again to words of hope spoken by a man with a gift for oratory. And I hope with all my heart that each of you will get a chance to discover Viola and be changed by her story as well. And if you find her marker on Highway 80, please take her some fresh flowers and some weed killer. I can't get back there again until March.
Posted by Tara Ochs at 2:51 PM

I was telling my 8 year old today about you and she was very curious to know more about your role. So we discussed Viola and who she was and how actors get to bring life to people that should never be forgotten. That is what its all about right? Sharing those stories with the next generation? I'm thrilled it's you who got to tell her story. Xoxo

Dear Tara Ochs, I am the sister of Viola Liuzzo. I want to thank you for posting the wonderful blog you wrote about her. I am anxious to see the movie Selma and I'm sure you will play the part as well as any big star. Sincerely, Rose Mary Gregg Lemming

Tara, I'm so excited. I am going to see the movie tomorrow with Sally and other members of her family. They sure cast you correctly as far as looks go. They could not have matched Viola any better. If they do a movie about just her, I hope you get the role. :)

Great job in the movie. She was a very courageous women.

Saw the movie last night and though, yes, your part was small, you really radiated warmth and conviction in the role. You completely stood out, even before the note at the end about what happened to Viola Liuzzo.
Kudos to you and your previous blog about race was excellent and inspiring. Keep up the great work in your career!

Thank you for this post. I didn't get a chance to introduce myself last night, but I danced with you. :) I appreciate your understanding and support of the movement then and now. Selma still needs so much help. Thanks for helping us keep the movement going.
Sincerely,
Jarah

I love everything about this. You were a tremendous presence in an inspiring film.

I think Oprah Winfrey and Brad Pitt should get together to make a film about Viola and the role she played in the Civil Rights Movement, aand Tara Ochs play her.

I wrote to one of Viola's daughters recently, commending her Facebook page Civil Rights: Holding the Hands of History, which is how I found your blog.

I was 12 on Bloody Sunday, and I remember those events SO well,that when I see this woman on screen, referred to as Viola, I immediately wonder, "Could it be THAT Viola?" And of course it was...

I mentioned her in passing in my blog a few years back.

Great job on the film. Odd, though, I kept thinking your hair should have been more blonde, but that's an artistic choice, I suppose.

Tara - Just saw Selma, and saw your name at the end credits, and then watched it again. It's an incredible movie, and your were extraordinary in it. Colman is beautiful in it as well. the movie was crafted with heart care and intelligence; it felt right to see you both in this production.