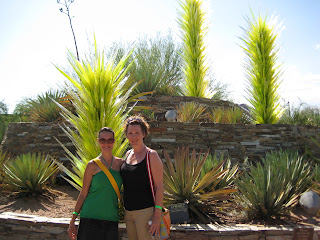 Ha ha! Take THAT! Warner Music Group! That will teach you to try and protect copyrighted material! For my next trick: a final episode of Southwest Escape 2009, using music that other people created, in order to (GASP! SHOCK SOUND!) introduce great bands to my friends and family, who might spend their hard earned coin on an album of their own. What a nasty music pirate am I! YAR!

Thank goodness for broad sweeping corporate censorship. And... bitter rant finished. It really didn't take much to get my selfish way, of course, and now you can enjoy the sounds of Widespread Panic and Kings of Convenience while viewing the final adventures of Tiff and Tara one-point-oh.

A friend mentioned that it seemed there was a lot we were leaving out. Which of course is true - this trip was very much about some soul-searching for both Tiff and I, and I quickly realized soul-searching makes terrible web-vision. It does, however, make for good bloggering, so I will take some time over the next month to try and reflect on what 3400 miles can give a person, besides a lot of gas receipts. In the meantime, thanks for watching and leaving comments, sending prayers and thoughts our way. It all, without a doubt, made a difference.
Posted by Tara Ochs at 2:35 PM 2 comments:

... then I'll have to kill you. But someone leaked some top-secret footage of Tiffany and I visiting a very unusual gas station in the middle of Southern Arizona, just off the I-10 Southeast of Tucson. I really can't say anymore. I may have already said too much. If you are reading this...
Posted by Tara Ochs at 12:55 PM 1 comment: 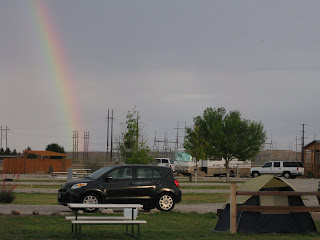 So Tiff and I decided to flush out a real tourist destination for our Memorial Day Weekend excursion. We chose Carlsbad Caverns, in the Southeast corner of New Mexico, dangerously close to Texas. Here is a video of our thrilling adventure. Needless to say, two weeks of camping and driving is starting to take its toll. We have also been followed by a storm cloud for quite a few days now, and it has made tent sleeping especially challenging. Also, we are reaching the end of our travels, as we head back to LA to face reality. Not quite sure what that is yet, but it will definitely involve some changes, for both of us. You can't help but have a little perspective adjustment when you see this many places, people, sleeping places...

We are getting a little melancholy. Time seems to slip by faster now like the last bits of sand in the hourglass. I hope you've enjoyed these videos as much as we've enjoyed making them - there will be a few more, but the bulk of the party has gone home, and its soon going to be time to start cleaning up. The Scion will be 3000+miles older, and we will both be a little browner. Keep watching though. The craziest things always happen long after the party should have been over...
Posted by Tara Ochs at 10:14 AM No comments: 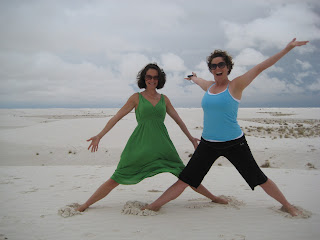 (Not Sipupa, which is what I've been saying for the last week...) Shibapu is the mystical entrance that connects the spirit world of the Anasazi (Ancient Pueblo) Indians to the realm above, which is the earthly realm. Isn't that interesting? The Ancient Pueblos believed the spirit world was DOWN BELOW, as opposed to up in the sky or in outer space somewhere, like modern religions believe. Which means that places like the Grand Canyon are held especially sacred, and of course you'd better take care of the Earth, since it's your dead ancestors' roof...

So New Mexico is known for having a lot of spiritual locales as well. Strange, that seems to be a re-occurring theme in our travels: Grand Canyon is the Shibupa of many Indian tribes of today, Sedona with its Vortices, Mesa Verde - duh, and now we have found a few spiritual stops in NM, namely Taos and Truth or Consequences. You'll have to do a bit of your own research to see why, but here's our video to give you a taste!

I don't want to spoil the surprise, but we didn't end up hanging out in El Paso, TX after all. The border crossing and dirty street vendors, reminiscent of a banged up Canal St, had our recently attuned instincts protesting insistently. We drove right through and ended up in a fantastic little neighborhood just 40 miles further down I-10 called Mesilla. The best Mexican food I've had in awhile at La Posta, and a little peace and quiet in a hotel to avoid yet another storm and the screaming-children-at-6am effect that camping in Southern NM tends to include.

I am exhausted! But our trip continues to unfold in a way that suggests the spirit world is as close as the nearest canyon or swimming hole, and our kachinas are making sure that we get to the next moment safely, and with nothing more than a door ding or a broken nail to contend with. We are indeed Blessed. 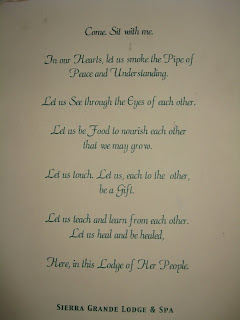 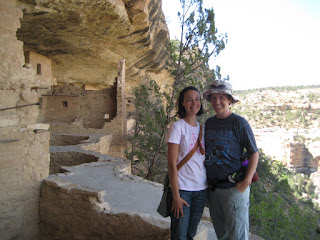 Now twelve days into the trip and finding the Southwest to be more and more stunning and surprising. It really has everything, from high to low, deserts, mountains, wet and dry... Tuesday night we slept safely in our tent as a summer storm swept over us, threatening to blow us into the San Juan River. The tent not only stayed in place, but kept us dry! It was so much fun that we decided to get a hotel room the next night...
Here is the next video. It's a review of our visit to Mesa Verde, as suggested by my friend Big Jay, the best Sous in all of Asia de Cuba. There is also a few shots from our exciting trip down the Animus Rapids, weighing in at Class 1-3, three being the scariest. The entire boat was filled with guides in training, so we got to really ride the meat of the river, which was also at its highest and fastest, running 4100cfps for 5 miles. It took us about 2 hours. Enjoy!
Posted by Tara Ochs at 9:25 AM No comments:

All my Exes Live in Vortexes 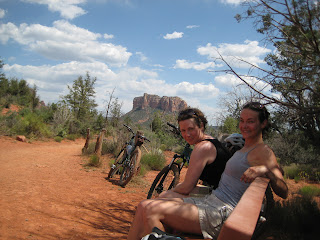 Your impatience is stifling. Here is the next video!

So Saturday morning we drove south from our little campsite to Sedona, AZ where the hippies roam free. We spent the morning in a local coffee shop listening to spoken word artists and a gal who was singing solo for the first time. Here's her MySpace page. Adorable. At one point in her as yet unrehearsed spiel, she mentioned her distaste for her former home: Los Angeles. Sensing a theme here? We took the afternoon to mountain bike around the stunning rock formations of Red Rock, and then got back to the campsite early so we could cook turkey burgers over our first campfire. By the way, I make a great fire, and Tiff makes a heck of a turkey burger and chopped potato feast.

Sunday morning we broke camp early and spent the day making our way to Cortez, CO. Along the way we took the scenic route through the Painted Desert and stopped in the Petrified Forest. In brief: it was a bunch of pretty rocks. The desert is stunning, but my favorite part was the gift shop, where rock and fossil collectors could spend a lifetime drooling.

I have had moments of panic, and a few tentative emails to the various income providing organizations with humble requests to excuse my extended absence. I have moments when I can't believe what I'm doing, and then moments when I can't believe what I'm doing. I have also had a few really strong moments of clarity, and that's what this is all really about. Can I go back to waiting tables? Is it time to find a new place? The more miles I put on the Scion, the closer I get to an answer...
Posted by Tara Ochs at 10:04 AM 1 comment: 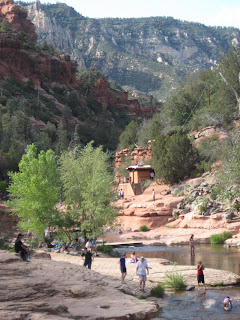 Wow - what have I gotten myself into? Its 9 days into the road trip and I'm already overloaded with footage and stories! Literally overloaded - my hard drive is filling up and I'm learning a fantastic lesson in letting go of holding on. Clothes that get stained, bugs on the bumper of my new car, sunburn and bloody nose - its just part of the life I have chosen. Can't argue with inevitability! So here is the next segment of our journey. Thanks for hanging in there through our ups and downs. I miss you all, and rest assured, decisions are being made. Heading out this morning to play in Meas Verde. OMG - I'm in Colorado. Amazing.
Posted by Tara Ochs at 9:20 AM No comments:

Well, we have driven almost a thousand miles now, and the next stops we are featuring in our latest video are the Hoover Dam and the Grand Canyon National Park, South Rim. The Scion is holding up amazingly well, but already the Sprint service is useless in the less-populated areas. So the videos will be uploaded as I can find hotspots. Of course the IPhone’s 3G network allowed Tiff to upload the sunrise from the lip of the canyon and send it swiftly to her boyfriend in Atlanta. Guess who will be jumping ship as soon as the new version of the IPhone comes out. Cross your digital fingers for tethering technology!! Free us all, Steve Jobs!

Just outside of the Grand Canyon we stopped in Cameron, which is one of the last and oldest Trading Posts in the country, smack dab in the middle of the Navajo Indian Reservation. We enjoyed ridiculously heavy and tasty Navajo Tacos, which consist of fried bread (Yes, really) topped with beans and beef and cheeses and two shreds of lettuce. I was having trouble enjoying the tacos, however, because I had noticed that my gas gage wasn’t budging – it had been sitting at 7/8 of a tank for a while, and my trip meter read over 100 miles. I was about to sick up my lunch by the time we got to a gas station to fill the tank, just to make sure the gage hadn’t busted on my brand new car. Sure enough, it was right. I have been getting almost 40 miles to the gallon – in the mountains, as well as the desert with AC blowing full blast. Eat that, Prius.
Posted by Tara Ochs at 8:31 PM No comments: 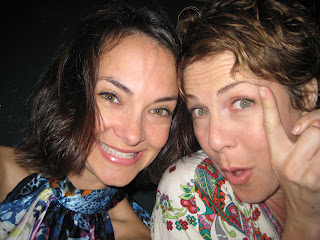 So the next leg of my trip has been posted - but here's the deal: I am on Sprint's broadband card, and that means limited data! So I can only upload these damn Video Logs once each, and Blogspot didn't make the cut! If you want to see what happened in Vegas, check it out here and be sure to leave suggestions for songs to listen to on the road, places to go, etc! And special thanks to Z, Mike and Chris for the fun times and Encore hook-up.
Posted by Tara Ochs at 10:17 AM No comments:

Ha - Got you with that title, didn't I? So I am hitting the road - here's the real story. Check back regularly for updates. Be sure to comment and subscribe!