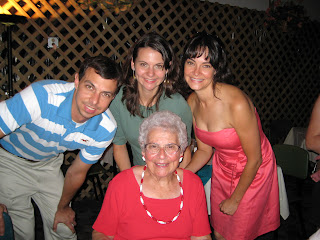 Which apparently is the going rate for docents in Utica, KS, where the Ochs etc family reunion took place. Grammy hosted 160 of us on the farm, complete with fish fry and go-cart rides to see the cattle. There was a moon bounce (good idea) and valet (bad idea - the boys just sat by the driveway drinking beers and let the cars park themselves).

Every year Grammy puts up 40 Christmas trees in her house, each one decorated in a different theme. I think 30 of them are actually lit, along with thousands of other individual Christmas decorations tucked throughout the house (nativity scenes, etc.) Grammy left the trees up this year, just for the family reunion. So the girl cousins were mostly in charge of giving "tours" of the trees - my tree to show off was the John Ochs tree (my Dad) which had an angel theme. I don't know how many times I heard mom make the joke that it was angels because it took an angel to put up with John. Hilarious, Ma.

My sister and I were both told by the oldest relative there, Helen, that we should have lots of sex. I'm pretty sure she meant with a husband, but I won't be the one to put words in the matriarch's mouth.

We drank a lot of beer and ate a ton of fresh caught fish and pheasant. There were an uncomfortable amount of kids running around, most of them belonging to my immediate cousins. Mom called it the best form of birth control - just seeing my cousins chase after their boys in the hot sun was enough to make me breathe a sigh of relief.

It's strange being at a party that big, drinking that much beer, and knowing that you can't hit on ANYBODY.

Utica is in the northwest corner of Kansas, and its population is about 125, most of whom I'm related to, I think. I haven't been in 17 years, and it was definitely smaller than I remember. Some people go to India for a spiritual check-in. Not me. I showed up Sunday morning to the local Utica (er... Methodist?) church with 60 of my closest kin, which was about three times the normal attendance. And I think I'm doing OK. Just when I think my life is a little too off the beaten path, I can remind myself - I'm an Ochs.

Just look at Great Aunt Helen - now that is a wild woman.
Posted by Tara Ochs at 11:38 AM 3 comments:

Nobody likes a Quitter

I was going to gossip about Britney Spears. I was going to tell you all about how she showed up my second to last night at One Sunset and pissed everybody off. She didn't tip (on a free meal!), accused someone of stealing her camera (which was in her car the whole time) and ended up causing all of us to wait an extra hour before we could go home while all the managers ran around trying to keep her happy and away from paparazzi.

I was going to try and explain how I decided to quit when I heard my friend the general manager was quitting.

I've written this entry about three times, and then I hit a wall. Because the truth is, I feel horrible about quitting a job. I put several months and a lot of heart into this restaurant. And then I decided to quit. Without thinking too hard about it. When my friends at the old restaurant, where I still have a job, make comments like, "I bet you're glad you didn't quit Asia de Cuba," I get a little irritated. It's not that simple. I wanted to see One succeed. I wanted my friends to build a place like no other, where money and happiness flow like specialty cocktails. And I'm not stupid for thinking it could have happened. But it didn't, so in a sense, I failed. And then I quit, without even trying to hang in and fight a little longer.

So I'm a bit disoriented. I think I did the right thing. I am no longer working at a place where I have to stay 9 hours and shout at the top of my lungs while shoving past drunken dancers not spending any money. I'm no longer taking the chance that on any given night I might walk with less than a hundred bucks, having completely wasted my time. ADC is more consistent, and I can work whenever I need to.

So that's it. Back to the routine, the status quo returns. I can't say I'm sad, just winded. And glad to have more of my nights free again. That much is definitely an improvement.

The night I decided to quit One, a lot of crazy things happened. But my friend Brendan mentioned something that I think may be the reason I don't want to elaborate. He said that whenever possible, it's always best to leave with your dignity. So I'll let the gossip alone. You never know who's reading...
Posted by Tara Ochs at 1:09 PM 3 comments: