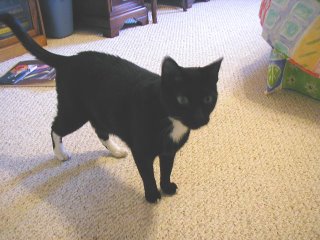 July 1995 - August 2006.
Banister Allouiscious Cretin the Third turned up missing this past August, having not returned home for his afternoon feeding at his residence in Seminole, AL where his caretakers Mom and Dad Ochs live. Bane Kitty, as he was known by most, was the smartest, coolest kitty that ever lived. He was born in Tallahassee, FL, abandoned to a pet store along with his brothers and sisters. My college roommates Melissa and Michelle rescued him for the price of a litter box and some gravel. He was given his many names by all three of us, but the concensus was that he most resembled his first name, Bane. He croaked like a parrot because he was part Siamese, and from his first days it was obvious that he would spend his 9 lives well. When Bane was not even a year old, he was hit by a car and broke his hind leg. He went into hiding for a few days where he contracted a severe cold and some nasty flea bites. When he finally returned, he was barely recognizable. It was the same summer that I was in London, so he was cared for by Michelle, Emily, Joe, and a few other friends. He walked around the house in a pink leg cast, with a cone around his head. Bane would soon become familiar with "the cone". When I returned to FSU the next year, Bane and I were a permanent pair. I officially adopted him from my other roommates, and we moved into the home of Tom, Lauren, Tanya and Mary Jane. Along with five people, Bane became fast friends with 7+ dogs, 5 other cats, two ferrets, two finches (one of whom he finally ate), and several fish. It was thanks to Lauren's vet skills that we discovered Bane's limp was the result of bad surgery - there was still a pin in his foot which should have been removed! Once the pin was removed, Bane seemed to recover like Lance Armstrong. (Or maybe we should say Lance would later recover like Bane.) The rest of Bane's life at FSU was fun-filled, and he met two of his best kitty friends, Thurston and Annabelle.
When I graduated from FSU, Bane traveled with me to Atlanta. It was here that he met his other best friend, Alex. They were fun-loving wrestling kitties, and even made a short film together. It was also in Atlanta that Bane first started to show signs of his life-long illness, Feline Herpes. It was during these many outbreaks that Bane would become truly familiar with "the cone", as his infections would develop in his eyes, eventually leaving him half blind. But Bane never lost his sense of adventure. He got to know my brother Jay for a few months by sitting on his lap while watching Survivor. He also loved his kitty-sitter Chad, on whom he played a great practical joke: for the week I was out of town, Alex pretended he was Bane and came in every day to eat while Bane went out partying on the town. For the whole week Chad fed Alex instead of Bane!
When it was time for me to move to LA, it was clear that Bane's health was delicate, and his best place was at the beautiful one-acre riverside home of my parents. It was here that Bane lived out the rest of his days, perhaps his happiest, ruling the woods of Seminole, AL. He was very well cared for by Dad, Mom, Laura and sometimes Jack and Helen. It was Jack and Helen's chihuahua Taco who was Bane's best friend in his later years. They would meet each other in the morning and walk around together, and even share food.
When I came home this past Labor Day weekend, Bane was gone. We don't know where he went to hide, but the last few days he was seen, he had stopped eating. Had he stayed home just one more day, he would have made it to the vet, but sometimes Kitties know better than we do. Perhaps Bane has just gone off to other adventures like he often did, and will return, but I have a feeling he's gone on the greatest adventure of all. RIP Bane Kitty. You will be missed.
Posted by Tara Ochs at 9:56 AM 5 comments:

Everybody else is doing it...

Hi and welcome to my new blogsite, friends and family! Its going to take me a few days to get all of this up and running, but after realizing that I could blog for free, I've been chomping at the bit to stick it to those Typepad fools. Silly me, thinking I had to pay somebody to host my blog - it was costing me $4.46 a month! And for what? Its not even as cool as this blogspot site. And my fear of losing past entries or readers is ridiculous - I don't do this for you people, I do it for me!! So from now on, if you want my news, its FREE! OK, so it was always free for you, but now its free for me, too. Next up, changing my long-owned email address so I don't have to pay six bucks a month just to keep it. Piracy, this internet business is!!
Posted by Tara Ochs at 7:54 AM 3 comments: