Patriarchal Calculus 101 - Solving for What Do I Do

I wrote this post a year ago, while trying to process a situation that feels eerily similar to what Lucy Flores wrote about in The Cut. It has sat in my 'draft' folder for a year. I'm not sure why I'm publishing it now, but if I were being honest I'd tell you that 'the incident' was now long enough ago that maybe my friends who read this won't spend any time trying to 'figure out' who or what I'm referring to. That's not the point of this post, and it doesn't matter. What matters is my voice.

To anyone who has ever asked "Why didn't she say  something?" I would like to provide a quick online course in the impossibly complex calculations that I call Patriarchal Calculus. 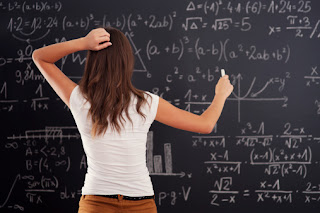 I cannot count the number of times I've been made uncomfortable on a set, where I've been the target of some sort of unwelcome sexualized behavior.  It happened again recently. Something mild, but nonetheless uncomfortable and frustrating.

I wasn't even sure it was a big deal, as I've become so desensitized to this kind of boys-will-be-boys crap, but since times are a-changin', I mentioned it to a few close friends.  Every last one of them was shocked, angered, totally skeeved out. It felt good to be held up and assured that this wasn't an acceptable norm. And then they each in turn asked me, from a place of deep love, concern and compassion:

Why didn't you say anything?

In the question there is a subtle accusation. I should  have said something. Why didn't I?  What's wrong with me?? Haven't enough women shown me what it is to be courageous? I am letting down the #metoo movement because I chose in the moment to stay silent.

In the question there is an implication. It's my responsibility to change the way this man behaves.  To educate him. To hold him accountable. It implies the next step in the 'me too' movement is for all women to confront their abusers. And do it NOW.  Not in two weeks.  Not in two years.  Not once they become famous.

I do have a plan that I am comfortable with, that privately satisfies my sense of justice, that I'm putting in to action.  And part of that plan is this blog, which serves to share with all of my loving supporters an explanation of how, on that morning, I did the infinitely complex math of sexual harassment, and came up with the solution of "Don't Say Anything."

Welcome to my first lesson in Patriarchal Calculus 101...

x = The severity of the offense, based on a completely subjective scale which is modified by previous trauma, personal preference and a myriad of other contextual factors (i.e. are you at work, a bar?). For some an action may not even register, but an example of a low value for x might be a light pat on the ass, while for others it might be a greeting of 'Hey Sexy'.  At some point on the scale the value shifts into the criminal range, and that zone also contains a sub-range which includes intent and 'I'm not a lawyer, how am I supposed to know?'... [Is masturbation considered assault? And when you're having to stand there and witness it, do you have the time to Google the answer?] Solve for x, in the moment. Determine the severity of the offense, and apply it to the equation.

y = The frequency of the action.  How often is this action occurring? Just once?  Every five minutes?  Every morning on your coffee break?

z = Our relationship. Is this my boyfriend? My boss? My friend's husband? My mentor, a colleague, an acquaintance, a stranger?

i = I.  What are you wearing?  Did you hug him hello? Have you been smiling and laughing at his jokes? Have you been drinking? Did you agree to meet him in his hotel room? What is your personal accountability in this situation?  Yeah, I know, I'd love to erase 'i' from the equation completely, but this is the patriarchy, folks. Forty years of indoctrination have taught me to consider the one factor I can control: my own actions. So add that sucker in.  It's part of the math, for now.

Divide all of this by...
!c! = The range of consequences.  Given that you haven't yet decided what exactly you're going to do, and factoring in the randomized nature of an assailant who at the very least is already crossing some line of propriety and therefore isn't bound by traditional social conventions as defined by Hallmark, Jesus, and the Bad Touch Doll, this value can only be represented as a range. Evaluate the likelihood within the range that each possible outcome might occur, given all the other factors you've previously solved for.  Perhaps on the spectrum is the ideal outcome -  he responds with immediate and heartfelt contrition, while everyone else in the room looks on in humbled awe at the beatific evolution of humanity.  Or maybe he gets offended and pouts.  Maybe he publicly shames you for over-reacting.  Maybe he fires you. Maybe he blacklists you.  Or maybe he gets more violent and hurts you worse. Quickly - do the math.

And before you complete the equation, you'll need to subtract the last factor...
WTF = Why is he doing this? This is an imaginary number, by the way.  It's impossible to solve for WTF without first completing the equation, so you'll just have to do your best.  Is it an accident?  Is this just an absent-minded gesture?  Is he 'old school'?  Does he really think this is OK? Does he think I'm enjoying this? Is he simply doing it because he can? Or is he sick in the head, needing help, giving me what he thinks I deserve? In the patriarchal calculus system, a woman may spend the bulk of her time, well after the incident, recalculating WTF. It is certainly the hardest value to resolve.

This complex probability equation must be solved in a very limited amount of time.  So in my moment of discomfort, I solved the equation and came up with the solution "Don't say anything, just put up with it for another half hour."  The alternate solutions which included -  1) push his hand away, 2) tell him to cut it out, 3) respectfully mention that his behavior is distracting, 4) scream and kick him in the nuts - all put me in a potential scenario that was marginally more uncomfortable than the one I was already in... The truth is I didn't even consciously think all that to myself. I've gotten so good at this math I do it in my sleep.

And now my friends are asking me how I came up with that answer. To them it's obviously wrong (they preferred solutions 2 or 4).  Unfortunately I broke the cardinal rule of math class - I didn't save my work. So I can't really tell you how I got my answer.  But when I came to them with my story, divulging it one inner circle friend at a time, I was testing the waters. I wanted to know if I was over-reacting. I wanted to be heard. I'm not traumatized, and I'm not wanting to destroy this man. On the scale of Aziz to Weinstein this guy doesn't even register. He's actually a decent person and probably just needs a good shaking... From a male friend, that will be able to look him in the eye and hold him accountable, just in case he tries to pretend he thought the advance was welcome (while on a job!), or acts like he didn't even realize he was doing it.

Women have to do these kinds of cost/benefit analysis equations every day. That's the current state of our society. In 2018. So if someone comes to you with a #(maybe)metoo story, please start by assuming she checked her work, and the answer she came up with in that awkward, irritating, or violating moment... was her best possible answer.  Instead, of asking why a woman didn't say anything, maybe try asking her if she feels like taking any action now or in the future, and if so, tell her you'll do what you can to support her. Or... just listen.

I don't want you to help me get better at doing this math.  I want none of us to ever have to do it again.