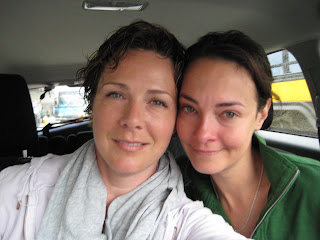 Let's see. May 29th, the last entry in my blog, was a Friday. I was sitting in an Extended Stay hotel - now I know what that is, and its terrifying. Tiffany and I needed one last place to stay in town so that we could get her to LAX in the morning. We had spent three weeks insisting on the Four Hour Rule: Do not plan anything further than four hours ahead. The exceptions were few, but included such things as booking the flight, which Z had done a week earlier, when we had been on the road two weeks and it felt like things were coming to a close. When we started the trip, we honestly didn't know where we were going to end up, or how long it would take us to get there. But after two weeks I had started to tap into a long buried well of... for some reason the word 'spirit' feels right here...Anyway, I had begun to feel like a seed probably does when it's been tucked deep into the richest earth, warmed sufficiently and soaked just enough that the shell that has kept it safe has now become a flimsy, uncomfortable restraint.

In church retreat terms, it was time to come down from the mountaintop. So we booked a flight out of LA for Tiff, because all my stuff was still there, and while the Southwest has amazing places every 150 miles, Texas is a Whole 'Nutha Story. We could have called some friends and stayed at their house, reveling in one last night of vacation. For some reason though, Los Angeles didn't feel like part of the deal. So we chose a crappy cheap airport hotel, spent way too much on a neo-cuisine sushi dinner, and went to bed early.

When I came back to the hotel after having dropped Tiff off, I felt... well, that's the thing. I can't really say what I felt, even now, months later. Ask a prisoner what they feel the day before they are to be released. I bet the answer is not relief, or anxiety, or excitement. I bet instead, their eyes will glaze over a bit and they will get quiet, and you won't get any answer at all. Wow - I guess I'm being a bit dramatic here, but it's true - when I got back to LA, when my big roadtrip was over, I didn't really feel anything at all. I just kept going. In my mind I was ready to find an apartment and get going again on my acting life. That was Friday.

Sunday afternoon I called my Dad. He flew into town Wednesday night and by Thursday afternoon I was back on the 10, heading East. By Sunday I was sitting in Tiff and Z's apartment in Atlanta, and I'm not quite sure how I made it that far. I wasn't relieved, I was devastated. My life was irrevocably changed, going back to LA was an insurmountable obstacle - I had jumped into the void.

Without question though, I had to do it. I just knew. It was time to go.

This summer has been intense. Someday I'll be able to look back and describe the highs and lows, the moments when it was almost a disaster, or the glowing signs of change and forward movement. Or maybe this will all be a blur, like a car accident. Right now I feel like I'm simply along for the ride. Like my life was heading this way inevitably, and I'll be lucky if I get to pick where we stop for dinner.

So if I'm not steering, who is? And where the hell are we going? If success is only an accident, and if we aren't in control at all - What would you do with your days?
Posted by Tara Ochs at 9:29 AM No comments: