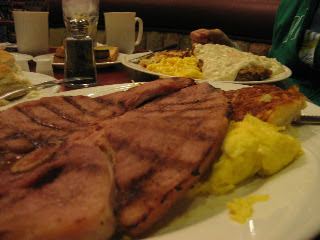 What you are looking at is a bone-in ham, part of the Trucker's Breakfast at Whiskey Pete's Casino in Primm, Nevada. You are not allowed to order anything referred to as a "trucker's" breakfast, by the way, and then express dismay at the enormous portions that arrive. I don't think any menu has ever been more clear about what you are going to have set down in front of you for the low-low price of $7.95. It's a deal, unless you add in the jug of Tums you will probably want to purchase on the way out. 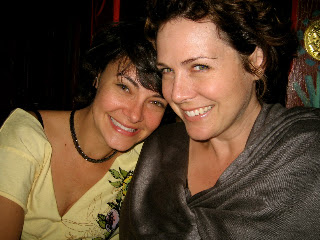 My best friend Tiffany Morgan and I have discovered a fantastic new family/holiday tradition. Thanksgiving in Vegas. During the cool Fall months, Vegas finds itself in desperate need of cheap folk to take over its otherwise empty luxury hotel suites. Tiffany, her boyfriend Z, several of our pals from Dad's Garage, and I took full advantage of the discount room rates and airline specials - and spent a week tearing up the Strip. Tiff, Z and I stayed at the Mandalay Bay and were given 3-for-2 night rates and complimentary suite upgrades. Or should I say SWEET upgrades. I even coaxed my new boyfriend Chris to come up and check out the fancy amenities for a night. We attended the Price is Right (only fun in groups, as the chances of getting to participate are a bit slim), Penn & Teller (not my cup of tea, but a cool show if you are into magic and/or have an IQ above 160), saw Tiffany appearing in her first feature film, Stephen King's The Mist (of all three shows, easily the best -and cheapest - ticket in town). Everything else we did? Well that stays you-know-where.
My world is becoming simultaneously smaller and larger - smaller because this crazy internet fad keeps me in touch with folks, no matter how far I move away from them; larger because I keep moving so far away and coordinating world travel is such a fuss! So naturally, this evolving society demands evolving rituals. It's not realistic to try and gather everyone around the dinner table to carve a bird the size of my TV. There are too many tables!
What if, while everyone else is fighting last minute traffic and trying to calculate pounds vs. hours of cooking time, what if you were sitting comfortably in the hotel spa having a contest with your best friend over who could use the most clean towels between hot tub soakings and steam room sweatings? And who pays the $27 each for this spa visit? 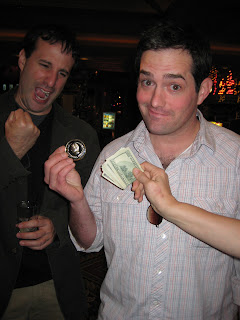 Well, your genius poker playing friend Z, of course, who spent 5 hours at Caeser's Palace the day before, taking money from lesser talented Texas Hold-Em players. Thanksgiving morning, instead of scalloping potatoes, you could be ordering that trucker's breakfast, or the chicken fried steak and eggs (pictured behind ham, above) and playing Pai-Gow while recovering from your persistent Vegas hangover. The pilgrims would have been proud, but better yet - the Native Americans can thank you today!

Wendy and I are headed to Sin City in early January - sans the kids. Wendy gets to gamble, which she's actually good at, but she's not yet tested Veags. I get to see cheesy lounge acts, as I suck at gambling. We're gonna go see the Beatles/Cirque show too.
The trucker's feast is definitely not on our list. I just cannot eat my weight in ham. In cheese maybe, but not ham.

dan's missing a beer from that other hand.