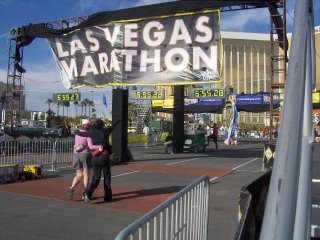 Well, the results are in, and yours truly brought it in under 5!! OH yeah!

This weekend, after 6 months of training, Team Burbank descended on the City of Sin to achieve the impressive - finishing a marathon. Or half a marathon if you're nasty. The New Las Vegas marathon, at 26.2 miles, is quite an event. We started at 6am and ran down the entire Vegas strip, past the seedy wedding chapels where several marathon couples got married while being witnessed by Running Elvises. Kept chugging along into Downtown, where the slots still take coins and give 'em back if you're lucky, and then off into the low-rent industrial side of town where the 8 mph winds tried to slow us down. But this baby wasn't about to back down. My goal was to beat my old time, 5:17:15, but I never dreamed I would actually be able to bring it in under 5 hours until after the halfway point when I realized I had time to spare. I averaged 11 minute miles THE WHOLE WAY. Except for the 12th mile which took me a little longer thanks to my hobo squat in the bushes. But even that didn't slow me down much, I even had to stop myself from running back onto the course while pulling up my pants. My mom and dad came to watch me, and said I looked bulletproof when I crossed the finish line. I felt bulletproof. I don't know if I'll ever do another marathon - it's HELL on your body. But man, there are some seriously inspiring moments in an event like this. A guy in a wheelchair who walks the last 200m with a walker. The cancer patient who reminded me as she crossed the finish line that there are much harder battles being fought everyday. It made me marvel at the decision to put yourself through such a trial. There's no real reason to accomplish such a feat, and yet thousands of people chose to do it, and did so sometimes at great cost. My friend Anni, another member of Team Burbank, also finished the full marathon, and sits at home as we speak soaking the socks off of her bloodied feet. In spite of the fact that she sustained an injury at mile 16, she fought it out to the finish walking the rest of the way (see pic). Maybe we do it just for the chance to be inspired.

Maybe you never truly learn something until you live it. In the Honolulu marathon I found out that when your body feels fear or doubt, it will use your subconcious to manipulate your behavior. For example, when my body wanted to quit, I started hearing voices in my head telling me I was a bad actor. That I was a failure. Usually when I start having thoughts like these, I get sad, and I GO TAKE A NAP... Ah HA! Caught you in the act, subconcious! You'll never fool me again with your tricks. This time, I found the truth behind the concept of mind over body. I see now where someone's willpower can actually sustain them beyond reasonable limits. It's the type of power that can make a father survive in the snow for so many days in order to try and save his family. My limits weren't tested quite so far, but I certainly saw the potential. Even as everything in my body told me it was time to walk, I kept running. On pure willpower. My quads have been reminding me of my tyrannical method ever since. Its times like these when I question the need for stairs.

At the point at which I realized that I was on pace to make it in under 5 hours, I started writing this blog in my head. I started imagining all the hugs and high-5s. I got a little choked up thinking about how proud my Dad would be that he won the bet he had with my mom. I'm still choked up. Maybe a marathon isn't THAT hard on my body. Maybe I'll do just one more. Perhaps I'll run the Great Wall of China. Of course I have to get out of this chair first. OUCH...
Posted by Tara Ochs at 9:21 PM

YOU are my hero.