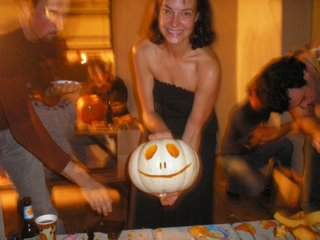 This past Sunday I hosted a pumpkin carving party. We had Pumpkin Soup, Pumpkin Pasta, Pumpkin Ale, and Pumpkin Pie. There were prizes given away for the best pumpkins and I think everyone had a good time.

I hate throwing parties. I turn into a crazy person. I spend all day cleaning and buy WAY too much food and booze, and then I sit around worrying that no one will come over. Eventually somebody shows up, and then somebody else, and before you know it, we have what's known as a party. There weren't too many folks this go round, I guess Sunday is a tough day to throw a bash, even my roommates Ryan and Joelle barely made it towards the end. But I just make myself sick wondering if people are having a good time or if they want to leave. The music wasn't very loud - I thought, Oh God, Everyone is going to want to leave. Nobody ate the food - the second they walked in the door - so of course I was convinced it tasted bad. It wasn't until after the eighth compliment that I relaxed enough to stop worrying about it. I was circling constantly, barely talking to any of my friends, to make sure everyone had beer - and then telling myself the whole to time to sit down and carve, since everyone already knew where the beer was. Honestly, I'm getting tense right now just thinking about it. I have wonderful friends - I think they would know how to have a good time waiting at the DMV. I just have a party phobia.

I once heard a story about a girl who was unpopular in high school, and her parents threw her a huge Christmas party - they rented out the local dance hall, hired a band and caterers, there were even printed invites. Only three people showed. They quitely made there way through the buffet line, ate and left. The girl and her Dad danced alone to the music in the middle of the hall, which must have been decked to the nines. When ever I think about that little girl, I want to cry for everyone that ever throws a party - and ends up dancing alone. So it looks like I dodged that bullet once again, but I think I'm done throwing parties for the year. Too many ulcers.
Posted by Tara Ochs at 7:56 PM

"The thing about Tara, which she will never understand, is that beer and food and music are a definite plus, but what everybody really wants is to see her and all have a few laughs together, before life catches up with us and we all have to be responsible again. And that we could do with water a pack of mustard and a couple of musical spoons. Oh and what I will never understand is why anybody would clean their house BEFORE a party..."
- Winner of the 2006 Scariest Pumpkin Award

T,
Your mom once told me, "Don't sweat the small stuff AND it's ALL small stuff". I prefer the "take a chill pill" variety, but both sort of remind us life is short, why not enjoy the ride?

Hey, was I invited to this? If I was I was probably too busy to come and I'm sorry. If I wasn't then, Hey!

y'know how you can tell if it was indeed a party: did anyone throw up? and if it was because of your food it doesn't count.
this is how we measure success. or is it excess...

yes, Overdroid - you were invited. Twice, actually. And as for whether not anyone threw up, does a pumpkin count? Drunk Frankie, winner of the Best Pumpkin Award, puked his seedy guts all over the porch. What a mess.

I would have totally thrown up if I'd been there. Just sayin'.