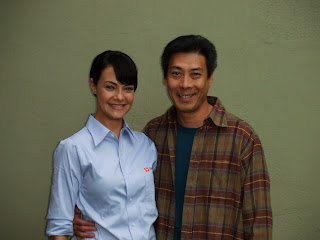 Isn't Lost just so good? I never thought of myself as a person that has "shows" they watch, but I have been a faithful Lost fan since the beginning, and strangely, it makes me proud. I feel like I belong to something, and that I'm invested. No longer one who fears commitment, I! The downside, I suppose, to being a fan, is that you do dumb things like I did with this guy pictured above. If you are a Lost fan, you'll know, first of all, that the man in the picture with me is Dr. Candle, a somewhat mysterious character who has maybe appeared in five episodes. For about three minutes total screen time. And I, shamefully, recognized him, and worse, insisted that I get my picture taken with him. And when I say shameful, I mean REALLY shameful. I was on the set of a commercial that we had both been cast in, so as a fellow actor I should have known better than to stalk him like a tourist on the Map-of-the-Stars'-Homes Tour. But I did, because I am a fan. And now I am posting the pic on my blog. The gentleman's real name, by the way, is François Chau, and he is quite a good sport, although he knows very little about the outcome of the show, or for that matter about his character's storyline. But he does get to go to Hawaii every once in awhile, and he does get recognized more often than you'd think.

As for the commercial shoot, that's a cool story, too. I booked a job (I think I mentioned a few blogs back) for Direct Energy, and they liked me so much, they brought me back for another campaign, this one for three 60-second spots. It took three days to shoot, and I played the part of a sexy/nerdy tech who is a member of an A-Team of Direct Energy technicians who make sure your home (in Canada) is energy-efficient, eh? The director, Ted, is one of the coolest guys you'll ever meet, and he shot the whole thing just like an old A-Team episode. We even had a Mr.T type on the team, and our van was tricked out with flames and a tailfin. In some shots, Ted would play the A-Team theme song while we did our "take" to camera. That damn song is still in my head. Our leader on the team was this fantastic guy who's been acting for ages, John Kapelos, who you'll know as the janitor from The Breakfast Club. It was a star-studded shoot, let me tell you. That's four (count 'em) commercials shot in April, none of which you are likely to see. But I'll see the checks, baby, and that's what matters.
Posted by Tara Ochs at 12:51 PM

I thought maybe you just took his head from IMDB and put it on Ryan's body...

I love this! Yesh! This guy is so creepy ~ way to go, sis. Now keep your eyes peeled for Jin, Charlie, or Sawyer ~ in that order.

or sayid and then desmond...